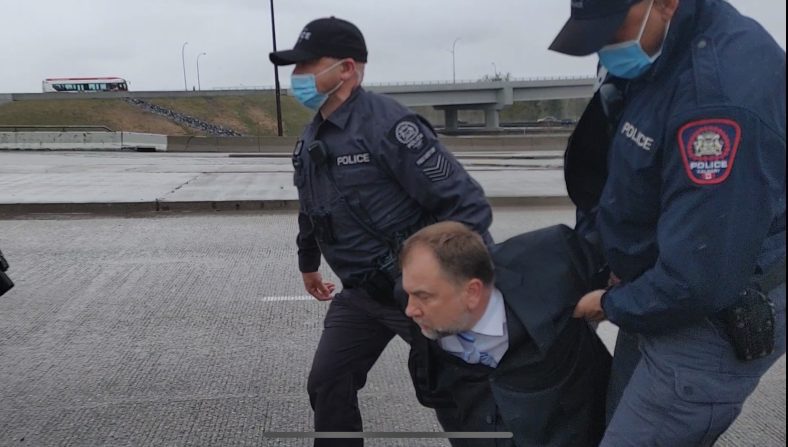 The trial begins today for a Polish-Canadian pastor who was arrested multiple times for defying pandemic-related court orders. This time he faces a “$100,000 ticket for feeding the homeless during the greatest crisis we have ever seen in our country.”

First of many arrests

Pawlowski was first arrested in April 2021 when he made police leave his sanctuary. He continued to defy court orders, holding church services weekly.

Pastor Artur Pawlowski faces over a hundred court cases, 16 arrests, 340 tickets, multiple trials, and a dozen criminal charges. Pastor Art has done nothing to deserve the degree of targeted enforcement and constant persecution that he has received.

He alleges he was mistreated in prison, including being held in a small metal cage and denied water for an entire day. He also claims his Bible and eyeglasses were taken away and he was forced to sleep on a concrete floor, strip-searched, and held in solitary confinement for long periods. Before he was released on bail, he was transferred to a psychiatric ward in another facility (despite never being diagnosed with any mental illness), where his cellmate was a man who killed his own brother with a machete.

Artur Pawlowski spent 51 days in jail following his latest arrest on February 7, after he gave a speech to a trucker convoy along the US-Canadian border after agreeing to become the pastor of the organizers which he described as the greatest pleasure of his life. The truckers were protesting the vaccine requirement for them to cross the US border.

Adam Soos of Rebel News reports that many of Pastor Artur’s charges stem from his participation in the “Coutts border blockade and a series of health order and contempt of court order violations resulting from Pastor Artur opening his church, feeding the homeless and attending protests allegedly in violation of COVID-19 restrictions and mandates.”

Pastor Artur has been accused of historical wrongdoing. For allegedly abetting the Coutts, Alberta trucker blockade, he is the first person to be charged under Alberta’s Critical Infrastructure Defence Act. Not even the truckers who are blocking the border have been charged under the Act, so arresting a preacher who went down, exercised his religious freedoms, and spoke for a few hours amidst the truckers before leaving is perplexing, reports Rebel News.

Pastor Artur: “It was the greatest privilege”

On June 1st Pastor Artur Pawlowski joined in on a virtual town hall with Mark Sherwood, candidate for OK Governor.  Mark Sherwood asked Pawlowski a pointed question, “All those arrests, all those fines, and all those days of incarceration, was it worth it to you and would you do it again?” He answered, “This was the most beautiful thing I have seen in Canada… seeing hundreds of thousands of Canadians coming together. I have seen them in different colors, different creeds, different backgrounds, broken english like me, coming together with children for barbeque, chilis, foods, coming together at the border and then going together to Ottawa. I have never seen something like this before.”

“When I was asked by the organizers to become their pastor, it was the greatest privilege anyone asked me to be part of…. We have 15 to 20,000 a week on the streets of Calgary and I’ve never seen something more beautiful… no guns, this is a peaceful revolution, no swords. This is a solidarity style, this is Mahatma Gandhi, this is Martin Luther King civil rights movement style. Non cooperation, simply do not cooperate with the villains. They are the really mafia, they are the real gangsters….”

“To say right now and to save my skin and to come out of these gallows to say I regret something that was a privilege for me to be a part of, it would turn me into them. I’m not them. I’m not schizophrenic politicians that lies to the people every time he opens his mouth.”

When describing the ridiculousness of his charges, Pastor Pawlowski went on to say: “I feed the poor. I run a soup kitchen for the most vulnerable in our society. That’s unacceptable for the commies. You’ve got to understand, for communism, fascism, every totalitarian regime wants you to worship them…. the police are the gangsters. They are the real mafia for the gangsters…. The moment our liberties go, they also go for our children and generations,” and also “God is raising courageous people, the Gideons if you will. Courage is contagious.”

A leader among prisoners

While in jail for 51 days, much of it in isolation, at the Remand Centre in Calgary he ministered to the inmates. Released on bail on March 31th, he now heads to court today.

Pawlowski also says he became a spiritual leader among inmates and held Bible studies with about twenty men.

Since his release, the pastor has remained on house arrest. He faces dozens of charges connected to holding church services during the pandemic. His opponents say he threatened public safety during the pandemic by not following social distancing rules and not requiring church members to wear masks.

Pawlowski was raised in communist Poland and has spent two decades warning about the direction Canada is taking.

“I can feel your prayers, and they keep me strong,” the pastor said after his latest release from prison. “God allows me to be here for a witness to the entire world, to show what happens when you kick God out of your nation. Lawlessness, injustice, abuse of power and corruption creeped in.”

More than 30,000 people have donated to a fund to pay Pawlowski’s legal fees through the emergency funding set up by Rebel News. Donate now to Pastor Artur Pawlowski at www.streetchurch.ca.