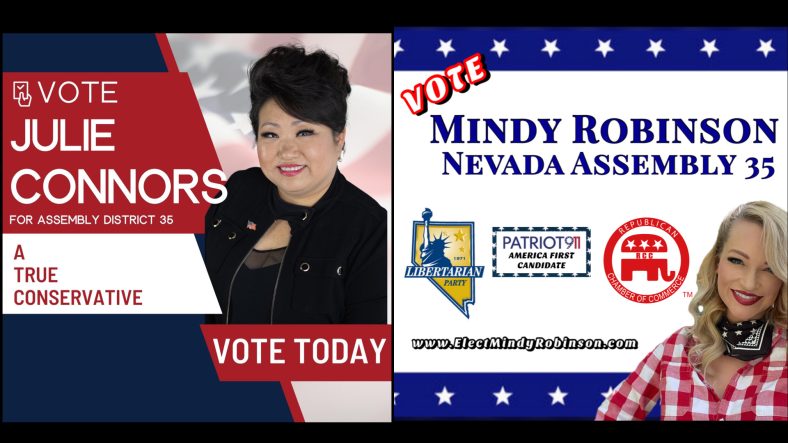 Our country is in crisis, the Left is out of control, and elected officials on the Right are seemingly letting them get away with everything. No one cares what the voters want, no one wants to hear what the voters have to say, and Congress is dead set to favor whatever foreign country they can profit over as opposed to helping the actual American people. The media continues to pit the American public against each other as a distraction against the real enemy, a government that no longer abides by the limits set forth by our forefathers in the Constitution. So what are good citizens to do?

In Nevada, they’re apparently willing to cross party lines to fight the corrupt establishment system. A day before the Republican primary, Libertarian candidate for Assembly District 35 Mindy Robinson, endorsed the better half of her opponents for her race, Julie Connors the local grassroot GOP candidate. In a statement, Mindy Robinson said:

I’m already on the November ballot as your Libertarian candidate, but if you’re in AD 35 please vote for Julie Connors over Tiffany Jones in the Republican primary. Jones is a former Democrat being propped up by corporations and RINOs, and I’d rather face an honest fiscal conservative in the general. This is about more than just politics, this is for our community…if I lose, I at least want to lose to an opponent who isn’t just toeing the line for the establishment so they can maintain their status quo and corruption. ~Mindy Robinson, Libertarian Candidate for Assembly AD35 www.ElectMindyRobinson.com

The endorsement went against Tiffany Jones, a former registered Democrat who is apparently fairly unliked in her community, who only cares about politics when it’s finally time to campaign, and whose past campaigns were all heavily funded by Big Pharma, casinos, and corporations, corporations that would love a politician they can control to carve up the district for their own benefit and profit. It appears Tiffany Jones is being completely propped up for this very reason.

In an unexpected return, Julie Connors sent out a text not only thanking her possible future opponent Mindy Robinson for her endorsement and trust, but for her active local activism against lockdowns and Covid tyranny as well.

My name is Julie w/ Elect Julie Connors. I am pleased to thank Mindy Robinson, the Libertarian candidate for Assembly in District 35 for her endorsement in the Republican primary. This woman has been a conservative spokeswoman for our causes and I have followed her on social media since the Covid lockdown. It’s not often you get endorsed by your future opposition, but this is how politics should be isn’t it? I am a mother and wife, a successful businesswoman, and an outspoken supporter of my adopted country, the United States. My older two children are in the Army and my two teenagers are attending public schools in Clark County. If you have attended any Republican events locally you will find a significant number of women running as well as many men and women who have chosen the US as our home and also chosen to be US citizens and Republicans. The Republican party has supported those issues that have attracted our diverse list of candidates for this election in 2022. May God bless America and the Republican party in this election. Thank you for being an involved citizen. I will be proud to serve you as your assemblywoman. Thank you for your vote. 𝗝𝗨𝗟𝗜𝗘 𝗖𝗢𝗡𝗡𝗢𝗥𝗦 702-406-7387 Will you make it out to vote? To end messages, STOP.

I don’t know what’s going to happen this election cycle, but everything I’ve been following along with Nevada makes it seem like it’s going to be one hell of a fight and one interesting midterm election. Check out our compilation of the best America First candidates from any party for Nevada, and let’s keep chipping away at this broken system, because it’s not going to fix itself.