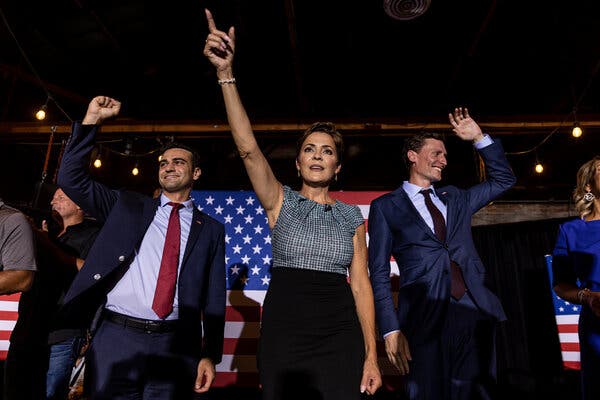 Kari Lake makes will take the lead into the general election

Former TV anchor and Trump-backed candidate Kari Lake has won the Republican nomination for governor of Arizona with a clean sweep of the state, elevating a candidate in a critical swing state who has supported the Donald Trump’s claim of 2020 election fraud.

Kari Lake officially won every single county in Arizona in a clean sweep of the state of Arizona.

She tweeted, “This isn’t MY win. This is OUR win. Thank you, Arizona.”

The 52-year-old mother of two began her career in Iowa after attending the University of Iowa to study journalism.

In March 2021, Lake departed her role as an anchor at the local Fox station in Phoenix.

After three months, she declared her candidacy for governor.

She knew in her gut that she won while 100,000 ballots were still being tallied in Maricopa County as of Wednesday afternoon. She believes she overcome a 41,000-vote deficit after early election results were published Tuesday night despite allegations of fraud.

Lake responded boldly when asked how she could declare victory without an official declaration: “We know the outcome.”

In her victory speech, Lake opened her press conference on Wednesday with a conciliatory tone, stating that she hopes to work with her former opponents Robson and Matt Salmon, who endorsed Robson after he dropped out of the race in June, and that she plans to bring Independents and Democrats into the fold, stating that Arizonans must work together.

Lake stated, “I’m not going to change who I am.”

“My victory does not mean I will switch parties and become a Democrat.”

Kari Lake recognized and called out the fraud in her election

Prior to primary day, Kari Lake had predicted fraud.

According to the Arizona Mirror, Lake told reporters, “We outvoted the fraud and we didn’t listen to what the fake news had to say.” The members of the MAGA movement voted as if their lives depended on it.

If elected in November, Lake also wants to eliminate postal voting and replace it with a single-day election, as well as improve Arizona’s existing voter identification and auditing procedures.

Biden is an illegitimate president

Lake has stated that she does not accept Biden as the country’s real president, a position backed by famous election conspiracy theorists such as MyPillow creator Mike Lindell and former Trump national security advisor Michael Flynn.

She has stated that had she been governor in 2020, she would not have validated Biden’s win. In the general election, Lake will face Arizona Secretary of State Katie Hobbs (Democrat). Hobbs defended the election process in Arizona as the one responsible for certifying Biden’s 2020 victory.

And if she wins in November, Lake’s most radical election-related proposals will require hand counting of millions of ballots from individual precincts where voters would be required to cast ballots in person, despite the possibility of missing statutory deadlines.