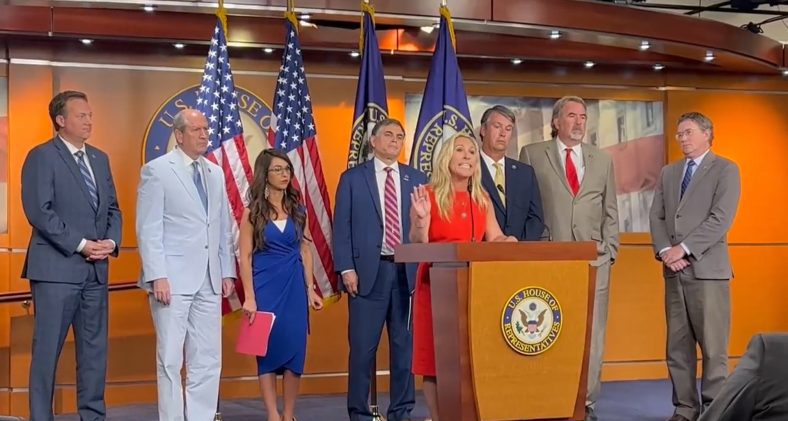 WASHINGTON, DC – In what Fox News called a “procedural move,” made possible by the cooperation of 14 Republicans, the Senate reportedly decided on June 21st to advance new gun control legislation.

On June 8th, five House Republicans defied their party and voted in support of a bill known as the “Protecting Our Kids Act,” which aims to limit “large-capacity” magazines and require serializing of “ghost guns.”

Therefore, it shouldn’t be shocking to learn that 14 Republicans are currently trying to promote gun control legislation in the Senate. Representative Marjorie Taylor Greene names their names here.

The 80-page bill, which was unveiled on June 21st, would, according to Fox News, “expanded background checks for gun buyers under 21, provides grants for states that implement their own red flag laws and offers additional funding for both school safety measures and mental health services.”

The bill would also create new penalties for “straw purchases” of firearms, require more gun sellers to register as Federally Licensed Firearm Dealers, and close the “boyfriend loophole” so that people convicted of domestic violence against an intimate partner are no longer permitted to purchase firearms.

These provisions may be able to pass the 60-vote barrier of the filibuster because to the procedural formality of the bill’s advancement, which received a 64-34 majority in favor.

This bill may be put up for a final passage vote—and quite swiftly, at that—if the Senate ends the filibuster.

On the Senate floor, Democratic Senate Majority Leader Chuck Schumer announced that they will “move to final passage as soon as possible” and that this endeavor may be successful in a week.