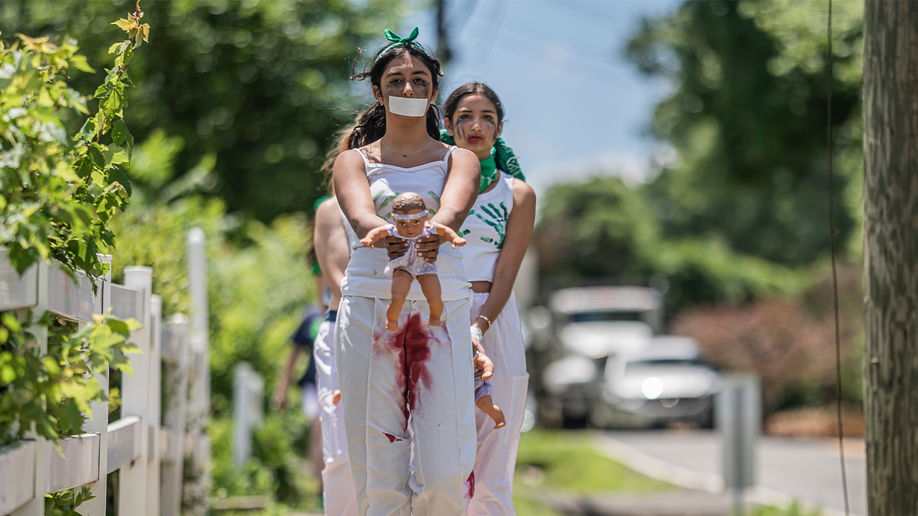 These Democrats are campaigning for abortions at eight, nine, and twelve months of pregnancy, as well as after birth. And they believe they are morally superior.

Rise Up 4 Abortion Rights, whose slogan is “Abortion On Demand & Without Apology,” has been protesting on a regular basis. The activists marched to Barrett’s home in Falls Church, Virginia, on Saturday as part of a “Youth Procession” organized by a 15-year-old girl called Arianna, according to the group.

“We are here at Justice Amy Coney Barrett’s house today with our arms tied, with our mouths covered, holding dolls because this is what Amy’s America looks like,” Arianna told a reporter.

Protesters were bringing dolls to the justices’ home, according to Rise Up 4 Abortion Rights, since Justice Barrett queried why safe haven legislation did not address the “consequences of parenting and the obligations of motherhood that flow from pregnancy.” during oral arguments in December.

“This is the terrifying visual of what America is going to look like,” Arianna continued.

Unharmed infants can be given to authorities in authorized sites such as police stations, hospitals, and fire stations under safe haven regulations.

“There’s no need to worry about forced motherhood,” the organization stated on its event page, “because Aunt Amy has adopted as a solution (completely absent from her ‘solution’ is any concern for women and girls being pregnant against their will”).

The abortion organization said in another online statement that it is “COMING to DC to STAY” since Tuesday could be the day the Supreme Court overrules Roe v. Wade with a ruling on Dobbs v. Jackson Women’s Health.

Disgusting protesters holding baby dolls and covered in “blood” harassing Supreme Court Justice Amy Coney Barrett at her home. She has young children and this is illegal. https://t.co/NV2zkiqrpX pic.twitter.com/19b3auYNul

Pro-abortion protesters descend on Coney Barrett’s home with blood and doll props as Biden WH/DOJ promotes/condones this ILLEGAL activity. BTW, has Biden said anything yet about the assassination attempt Kavanaugh? https://t.co/Lb5EyrzyRp #FoxNews