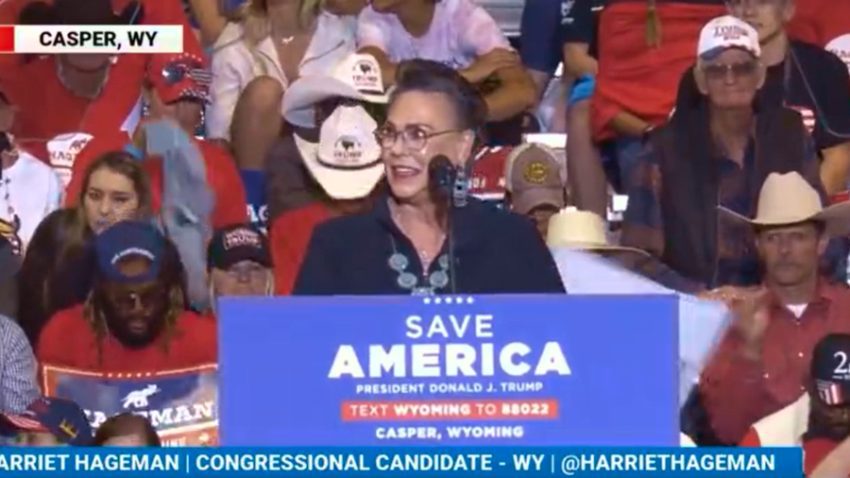 Harriet Hageman vs. Liz Cheney for US Congress

Harriet Hageman faces incumbent Liz Cheney in Wyoming’s primary election on August 16, 2022 to represent Wyoming’s At-Large Congressional District. Also, she was born in Fort Laramie and proud to fight for the people and stick up against big government bureaucracy.

Hageman spoke at the President Donald Trump Rally in Casper, WY. Specifically to oust RINO (Republican in name only) Liz Cheney. She proved to be the best person for the job after Trump’s endorsed and introduced Hageman to the world.

Hageman took the stage prior to President Donald Trump to deliver a fiery MAGA speech that made the crowd erupt in cheers and applause. The electricity was comparable to the enthusiasm experienced in Donald Trump election and reelection campaigns, 2016 and 2020 respectively.

Hageman made the crowd go wild at Saturday’s Trump rally. Her “we’re fed up” litanies include:

When President Trump took the stage he called Wyoming “MAGA country.” Time to “dump RINO congresswoman Liz Cheney” and time to elect Harriet Hageman. Trump called a Hageman win a symbol of rejecting what Liz Cheney represents: globalism, constant wars, and so on. Hageman will be a “true champion and hero for this state.”

At the start of Hageman’s fiery speech, she said she’d “like to say I’m glad to be in Wyoming but instead I’ll say glad to be home.” On her website, she describes herself as a “deep-rooted Wyomingite”:

“Raised on a ranch near Fort Laramie, I grew up understanding the value of hard work, integrity, self-sufficiency, and honesty. Here in Wyoming, we have a long and proud history of standing up against an overbearing government. And now, we are fighting back against big government bureaucrats who want to manage our lands, control our lives, and dictate what we are allowed to think and say.”

“She then began working in private practice throughout Wyoming, Nebraska, and Colorado, specializing in water and natural resources litigation. Hageman’s law career has mostly focused on challenges to federal and state regulations on land and water use. She and former business partner Kara Brighton Fornstrom founded the Wyoming Conservation Alliance in 2004, aiming ‘to increase public participation at both the state and federal regulatory level.'”

Hageman is considered a true conservative by Republican voters, and many were willing to vote for her before Trump’s endorsement. After disappointing her voter base and having lost her way, voters are ready to replace Liz Cheney.