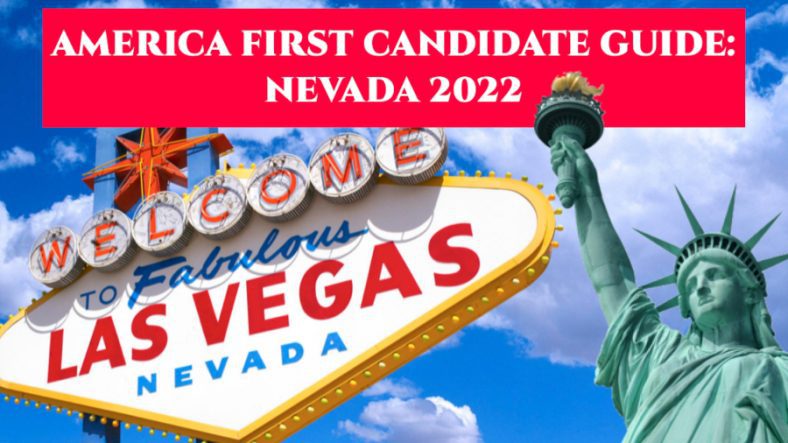 While it’s become clear to anyone paying attention that the Democrats are out of their mind, it’s also becoming important in these midterms to vote for the right kind of America First conservatives who will actually to do something to keep our country great. Americans cannot afford any more Deep State sell-outs like Mitch McConnell, Lindsay Graham, and Kevin McCarthy.

To recommend the best America First candidates running for office in 2022, I reached out to well-trusted patriots all over the US for their recommendations, in search for the most anti-establishment, anti-government corruption, grassroots candidates, starting with the heavily contested “battleground states.”

Nevada patriots were the first to get back to me with their candidate recommendations. I was honestly surprised to hear that there were a lot of Libertarians suggested over Republicans; although, they did help fill in the seats no one else would or could recommend a Republican for.

During research, I was told there’s a huge issue with Republicans-in-name-only (RINOS) in Nevada and that the state GOP leadership under Jessie Law and Michael McDonald is beyond corrupt. There seems to be significant in-fighting for power, where officials hold separate or unannounced meetings, and pull shady tactics to try to push through the candidates they want to control.

Even though everyone I asked was either a Trump supporter or had at least voted for him, none of them recommended the two candidates (Lombardo and Laxalt) Donald Trump endorsed in the state. Sounds like it was in the vein of the recent, bad Dr. Oz endorsement, because literally no one I asked wanted Joe Lombardo for Governor. In fact, they seemed to loathe him for being pro-mandatory Covid vaccines and for covering up improprieties in the Las Vegas shooting massacre. Everyone, and I mean every single person I spoke to that I trusted, recommends Joey Gilbert for Governor over Lombardo.

I’m not familiar with all the internal workings of Nevada politics and elections, with who will do the best in the primary, or who will most likely advance to the general. This America First candidate guide is meant to serve as a compilation of the best primary and general candidates to my knowledge, while not sure of who will appear on what ballot or when. I’ll continue to build lists for the other battleground states because these midterms are so important and probably our last chance we have to fix our country.

Here are my recommended Nevada candidates; the star to the right of the names represents candidates who were strongly and unanimously recommended to me:

State Treasurer: (I got many different or blank answers, so I cannot recommended any candidate over another for this particular seat.)

I will update this list after the June 14th primary runoff.